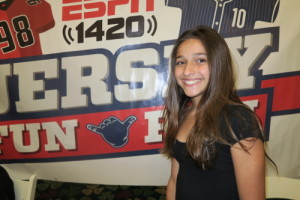 By Lance Tominaga
Teilor Grubbs is a terrific young actress – she just turned 13 – who plays “Grace Williams” on the CBS show, “Hawaii Five-0.” We sat down with Teilor yesterday during her special appearance at Kahala Mall, where she helped promote the inaugural Jersey Fun Run at Aloha Stadium.
Here’s our exclusive interview:

1420: What’s the question that you always get asked when you get interviewed? Let’s avoid that one.

TEILOR: Usually it’s “Out of all the people on ‘Hawaii Five-0,’ who do you like the most?” I get asked that a lot.

TEILOR: Yeah. I never have an answer for that.

1420: “Five-0” is now in its fifth season, and you’ve been part of the cast from the very beginning. Do you still get excited working on the show, or is has it gotten kind of old for you?

TEILOR: Oh, it’s still exciting. I don’t even feel like it’s work. It’s so fun for me!

1420: How do you think your character, Grace Williams, has evolved and developed over the past five seasons?

TEILOR: I can tell that I’m “growing up” on the show. Definitely, my character is encountering “older” problems now than when the show first started. I really feel like the storylines about my character are things that I can relate to [in real life]. I like it.

1420: In an upcoming episode, Grace is caught sending texts to a boy. You’re getting interested in boys now.

TEILOR: Yeah. (Smiles.) That was a fun experience. It was sort of new for my character, and that was fun.

1420: We’ve been reading up on what’s coming up in future episodes, and we understand that there will be consequences for Grace’s dad, Danny Williams, for killing that scummy South American crime lord. But your character is safe, right?

1420: Oops, did I say that out loud? Forget you heard that. But I am curious: When someone yells “Grace!” on the set, who looks up – you or Grace Park?

TEILOR: Grace Park does. Everyone on the set calls me “Little T.”

1420: Do the other cast members help you out with acting tips and advice?

TEILOR: A lot! They always give me good tips and help me out whenever it’s needed. I see myself growing as an actress, and I hope to keep growing. “Five-0” is my first experience with acting, so I’m still feeling my way. I’d like to keep my acting career going.

1420: I read somewhere you that were inspired to get into acting after watching “Hannah Montana.”

TEILOR: (Laughs.) Yeah! When I was super young, I told my parents that I wanted to be like Hannah Montana!

TEILOR: I have no idea!

TEILOR: I’d like to be in L.A. doing some other TV or movie roles. I don’t have a preference which.

1420: You’re also a member of Pacific Elite Cheer and Dance. How did you get involved with cheerleading?

TEILOR: My Mom coaches cheer at Kaiser, and she saw one of the all-star cheer teams perform at a competition. She signed me up when I was five or six. And now, on the show, my character is a cheerleader and they show me doing cheer stuff. That’s fun.

TEILOR: Going to the beach. And shopping!

1420: In a recent episode, you were doing a lot of running. Do you like running?

TEILOR: Not at all. I hate running.

1420: You do realize that we’re trying to promote the Jersey Fun Run, right?

TEILOR: (Laughs.) I don’t like running. But I’ll probably participate in this one!

1420: Last question: What jersey are you going to wear on Saturday?

TEILOR: Well, my Dad’s from Virginia, so we usually cheer for the Redskins. But I don’t know what I’ll wear yet. I’m sure I have a jersey somewhere in my closet.