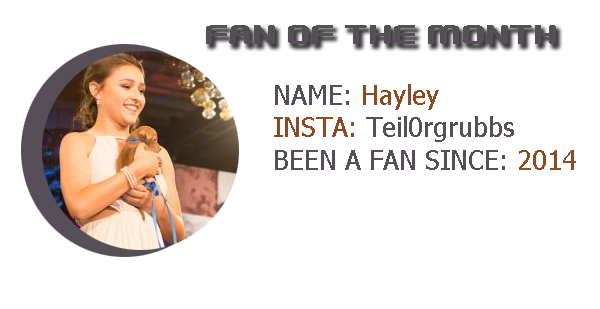 This month’s winner is Hayley. She was chosen cause not only does she have an awesome fanpage for Teilor but she’s also a sweet person and a good friend. If you don’t know her..go on and follow her page

Here is her story as to why she became a fan of Teilor:

“I became a fan when I started watching Hawaii Five-O and whenever I become interested in something, I do a ton of research. When I was googling the cast and I found out Teilor was only 2 years younger than me, which I thought was so cool because she’s accomplished so much for her age. I joined Instagram and made a fanpage. As I learned more about Teilor, I really admired her. She’s so sweet and kind. I also thought it was cool how flexible she is and I wanted to be like her so that ended up being one of the reasons why I tried dance again.”